1. Principle: oil and sodium hydroxide are boiled together and hydrolyzed into sodium and glycerol, the higher fatty acids. The former is processed and formed into soap.2. Supplies: one beaker (150 ml) and one beaker (300mL), glass rod, alcohol lamp, asbestos mesh, tripod, lard (or other animal fat or oil), NaOH,95% alcohol, saturated salt water.3. Operation (1) in a 150mL beaker, put 6g lard and 5mL 95% alcohol, and then add 10ml 40% NaOH solution.Stir with glass rod to dissolve (heat gently if necessary).(2) place the beaker on an asbestos net (or in a water bath), heat it over a low heat and keep stirring with a glass holder.During the heating process, if the alcohol and water are reduced by evaporation, they should be replenished at any time to maintain the original volume.For this purpose, 20mL of alcohol and water mixture (1:1) can be prepared in advance for addition.(3) after heating for about 20min, saponification reaction was basically complete.If necessary, a few drops of sample can be taken out of the glass rod and put into the test tube. 5~6mL distilled water can be added into the test tube and heated and oscillated.When still, have grease to divide, show saponification is not complete, can add lye to continue saponification drop.(4) slowly add 20mL of hot distilled water to the saponified viscous liquid, and stir to make them dissolve.Then slowly pour the viscous solution into 150mL hot saturated salt solution and stir as you add.After static place, soap then salt-out rises float, wait for soap to precipitate completely, after solidification can use vitreous bar to take out, soap is made namely.4. Note (1) oil is not easily soluble in alkaline water. Alcohol is added in order to increase the solubility of oil in alkali solution and speed up saponification reaction.(2) if no water bath is needed for heating, use a low fire.(3) saponification reaction, to maintain the original volume of the mixture, do not let the mixture in the beaker boil dry or spill outside the beaker.Note: saponification reaction: reverse hydrolysis of oil under alkaline conditions

How to make soap from animal fat/soap making machine

How to make soap from animal fat

Lipids are substances insoluble in water. They are derived from animals and plants and are mainly composed of triglycerides, fatty acids.Customarily: usually the room temperature liquid is called oil, solid or semisolid is called fat, both collectively known as grease.Grease is the main raw material of soap making, and the performance and quality of soap are largely determined by the grease used, so the choice of grease is the key to soap making.

1. Main animal fat for making soap.Commonly used soap main animal fat: butter, lard.Butter is the main by-product of fatty acid processing industry and the main raw material of soap soap.Lard is rich in linoleic acid, so it tends to rot when used as soap.When soap is made, semi-hardened non-edible lard is substituted for butter.

Animal fat needs to pay attention to the control of lipase and bacteria before cooking fat, so as to get high quality animal fat.The quality of oil can be improved by washing, decolorization, alkali refining, deodorization, hydrogenation and other processes.

Washing can effectively remove pigment and impurities in oil.Had better be in water temperature (100 ℃).In order to enhance the hydration effect, you can add a mild surfactant, such as sodium phosphate, 0.1% of the amount of oil into a solution of 10%.

Animal fat used for making soap usually needs to remove pigment. The most commonly used is to use acid activated clay for adsorption to remove pigment.Oil decolorization, the temperature is 105-115 ℃, and need to add 0.5% to 1% of the water, more advantageous for decoloring.

Deodorization of oils used to make soap is not very common.Perfume is often used to mask the smell of soap.

The hydrogenation of oil increases the stability of oil and improves the foam and solubility of soap.In particular, hydrogenation of unsaturated fatty acid polymers can prevent soap deterioration.Animal fat can be obtained from the saponification of oil, soap base production, soap base drying, plus ingredients, layering, cutting, printing, packaging, and finally made into soap. 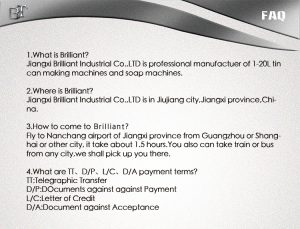